Free Ground Shipping. All The Time. No Code Necessary. Learn More.
Select free shipping option at checkout.
The store will not work correctly in the case when cookies are disabled.
Menu
Account

Fire pits have come a long way since humans first discovered fire. Nowadays, digging a hole in the ground is not nearly as trendy as the sleek new design of a low smoke fire pit. And while fires are still a great place to gather or grill food, the added benefit of a low smoke fire pit is – you guessed it, less smoke.

While there is not such thing as a smokeless fire pit, these new-fangled low smoke fire pits do create considerably less smoke than a traditional fire. For starters, these fire pits are specifically designed with the end user in mind, and one of the biggest consumer questions is, “How do I get my fire to have less smoke?”

With some state-of-the-art engineering, of course!

Here are a few main differences between a traditional fire pit and a low smoke fire pit. 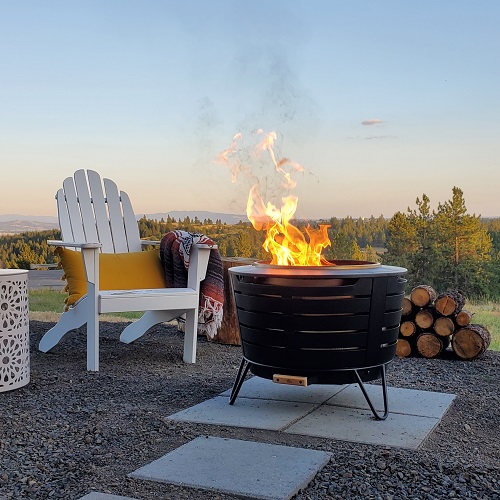 With a traditional fire pit the cost can vary drastically. It can cost next to nothing if you have a shovel to dig a hole, or it can cost a few thousand dollars to landscape an entire backyard with stones and brick to make your fire pit come to life.

A low smoke fire pit typically ranges around a few hundred dollars, they don’t require any digging or contractors, and you can find them online or at retailers.

Traditional fire pits don’t move. They are either a hole in your ground, or they are part of a brick or stone foundation.

This works for many people, but for those who are looking to bring their fire with them, a low smoke fire pit provides portability to your fire pit.

Traditional fire pits can vary in temperature quite a bit, depending on how they are made, what kind of fuel is used, etc.

In a low smoke fire pit, the temperature is more consistent, and some of these fire pits get up to 1000 degrees! They are generally made out of stainless steel, so they are able to withstand the heat.

A traditional wood-burning fire pit will leave behind considerable amounts of soot and residue. This can require a shovel or other yard tools to dispose of the ashes once your fire has burned out.

A low smoke fire pit produces significantly less ash. They’re not nearly as messy as a traditional pit, and they won’t leave you smelling like smoke either.

While deciding what kind of fire pit is best for you can seem a bit overwhelming, hopefully these insights can help you make an informed decision on how to move forward with your traditional or low smoke fire pit.

HOW HOT DOES A FIRE PIT GET?

LEARN WHAT THE EXPERTS (AND USERS) ARE SAYING!